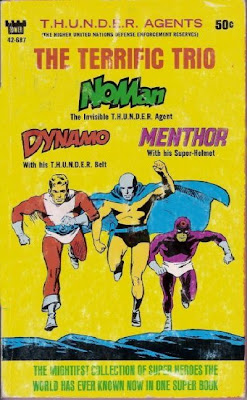 THE TERRIFIC TRIO was one of three T.H.U.N.D.E.R. AGENTS paperbacks put out by Tower in the mid-sixties. According to some reports, Tower--already known as a mass market publisher--had planned all along to cross merchandise their super hero line in this format. If so, though, you'd think they'd get the coloring right on their own characters. Both here and on DYNAMO-MAN OF HIGH CAMP (Ugh!), that character is colored all wrong. Menthor here is given a green face for some reason and a purple costume to replace his blue (which, by the way, was essentially the costume of DC's Atom!). Only NoMan escapes the evil colorists both here and on HIS own book (which I actually bought for the first time the other day at Mid-Ohio Con!)