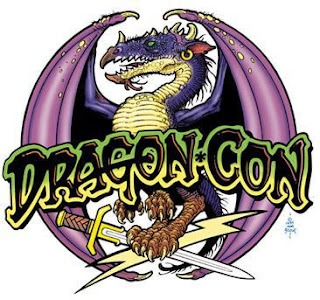 Seems like Dragon Con in Atlanta is THE place to be this weekend for an amazing list of showbiz folks, comics artists and publishers including Craig Yoe and, representing the Wood Estate,  David Spurlock.

Here's what David has to say about it:

This weekend, DRAGON-CON in Atlanta!
3 S's! SIENKIEWICZ, SPURLOCK & STARLIN!
Stan Lee, Alice Cooper, Bill Stout and Neal Adams will also be around. We will have a few STERANKO items but more FRAZETTA & WALLY WOOD. Including some RARE, VINTAGE Wood Sally Forth and Cannon prints from the early-'70s! The only OFFICIAL print of Panels That Always Work, as well as Frazetta prints and books.

Posted by Booksteve at 12:40 AM No comments: 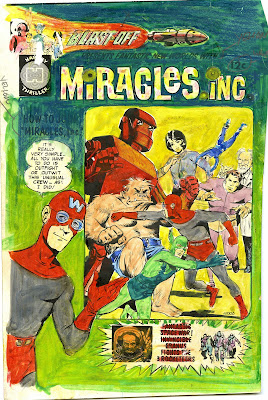 Spotted at Heritage, here's a color guide for an unpublished cover featuring Woody's MIRACLES, INC.
Posted by Booksteve at 3:06 PM No comments:

THE WALLACE WOOD ESTATE posted this on Facebook earlier today. With permission, I'm reposting it here (updated) for those of you who might be likely to purchase some of the questionable items on eBay.

We noticed some Wallace Wood "transparencies" on eBay. Supposedly rare printing production items (but with no crop marks, grids or other technical notes outside the image area). Maybe they are real, maybe not. Buyer BEWARE. We sent this message to one seller of such:

I am the Director of the Wallace Wood Estate, founder of Vanguard Publishing and have a long background in graphics production going back to the mid-'70s. What you have is more properly named a "Film Positive." A "transparency" is designed to have light flow through the image -- as in a 35mm slide (but usually bigger). In a Film Positive, you have an opaque black emulsion (light can not travel through) on transparent film medium. Normal (traditional, pre-digital) comics production DOES NOT call for the creation of Film Positives (but tend to use film negatives, PMT/Stats which are often hand-colored, and ColorKey layered, CMYK color film proofs, or flat MatchPrint color proofs). True, vintage, comics Film Positives are
practically unheard of (except for a few painted graphic novels where the paint was on a blue-line print with the line-art on an overlay/Film Positive). At least 90% of the purported comics Film Positives I have seen (at conventions) are fakes. They aren't even shot on a true graphics camera (like stats and Veloxes are shot on) but are (recent) Xeroxes on clear film (treated heat-resistant acetate). It is EASY to tell the difference if you know what to look for. On true Film Positives, the black is totally opaque. No light at all can pass through any of the deep, rich black and the film is crystal clear. On most of the fakes -- the film Xeroxes -- the black is less dense (sometimes even grey) and sometimes the film is not quite as crystal clear and shiny-smooth as it has been treated to withstand the heat (without melting) inside a Xerox machine. Maybe you don't care if yours are real as long as they sell. But in case you do care, I thought you should know to watch out for the fakes. Also, if a real Film Positive ever were made for comics, they would be one-of-a-kind.... you would never see another real Film Positive show up of the same page. They would also tend to have crop marks and other technical notations in the gutters outside the image area. I hope this proves helpful. 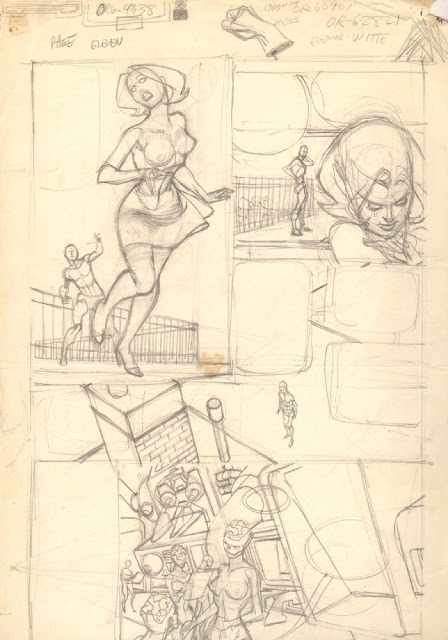 Ken Landgraf kindly sent along this scan of Gil Kane's layouts for a page from the GREEN LANTERN story he and Wood did in the late sixties. I always thought they made a fun and fascinating combination and one of the few where Wood's inking didn't overpower the penciler. 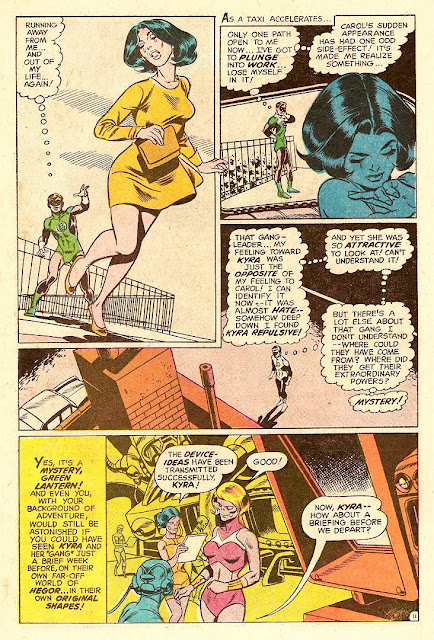 A Field Guide to the IDW Artist's Edition 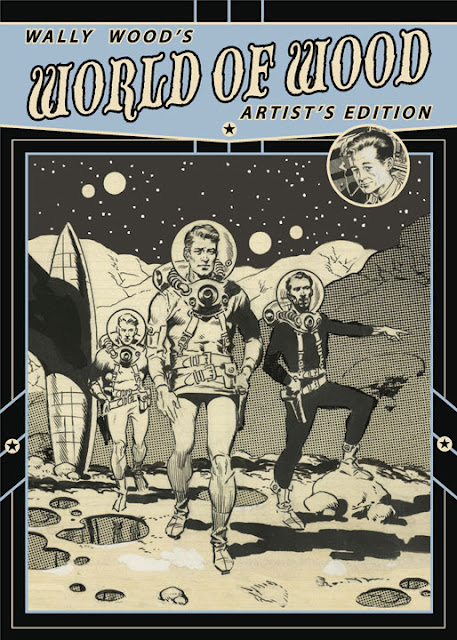 Seen above is supposedly an early concept for the hugely popular Artist's Edition. This image, with its dreadful title font, appeared late last year on message boards. To the best of my knowledge, no copies of the actual book ever had this image. 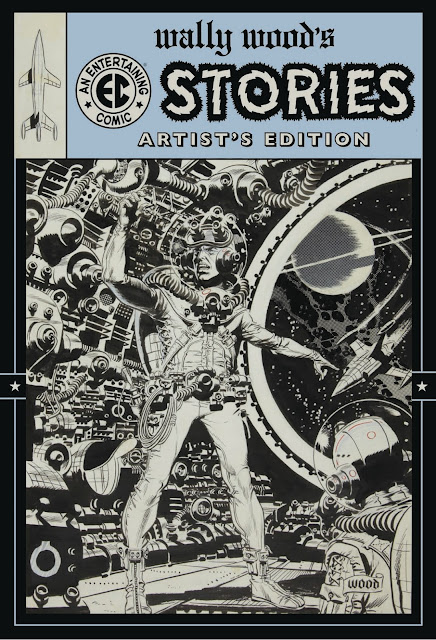 This one was the cover as solicited but as far as I know there are NO copies out there with the light blue as it was changed to the orange below by the time it was printed and shipped. 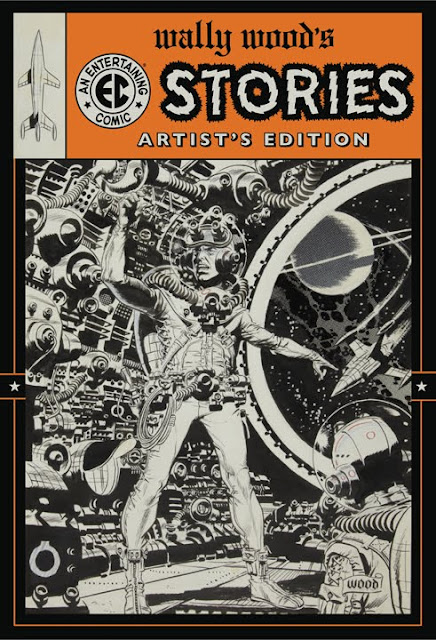 Seen below is the First printing variant cover, a limited number of which were made available at a convention after the main edition had sold out so quickly and unexpectedly. It is still a First printing, not the Second. 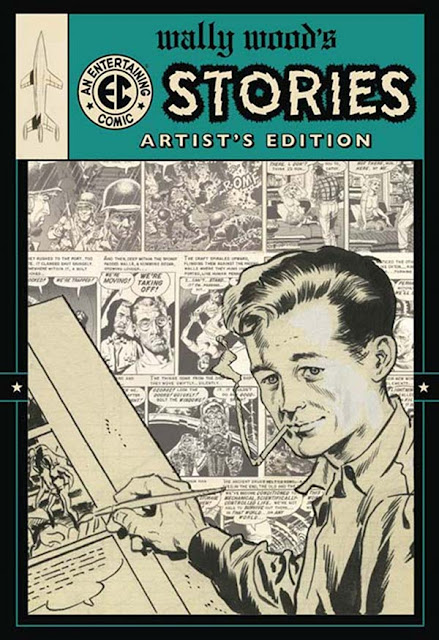 Finally, shipping now are Second printing copies featuring the cover below with the pea-green color. No word yet if there is or will be a variant cover for the Second printing. 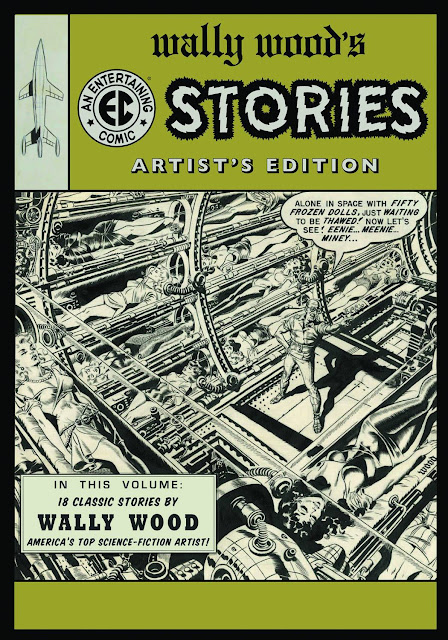 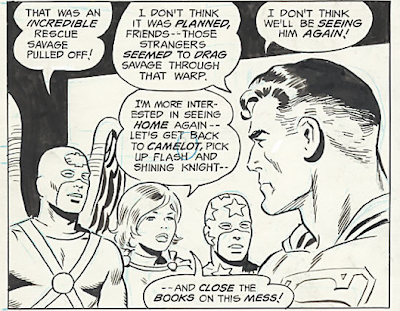 Here are a few beautiful pages from Wood's ALL-STAR with Superman and Power Girl.

http://popculturesafari.blogspot.com/2012/08/wally-wood-original-art-all-star-comics.html
Posted by Booksteve at 2:19 AM No comments: 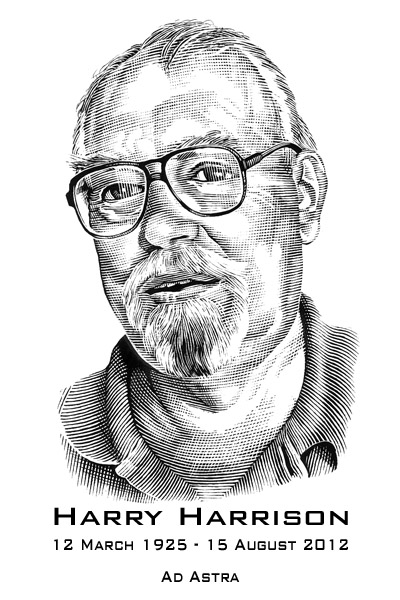 The image above comes from Harrison's site here: http://www.harryharrison.com/
Posted by Booksteve at 8:36 AM No comments: 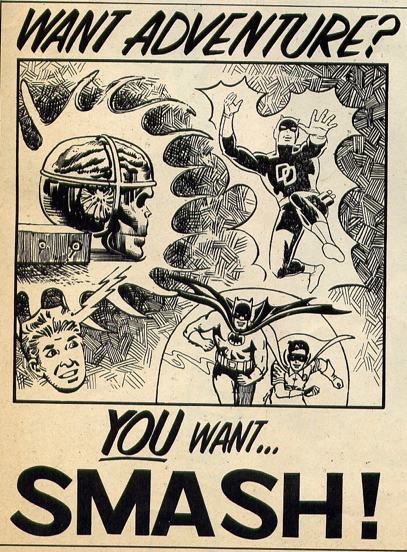 Here's an odd mid-sixties ad for the UK comic SMASH which featured reprints of the then-current BATMAN & ROBIN newspaper strip as well as Woody's then-recent DAREDEVIL!
Posted by Booksteve at 9:36 PM 3 comments: 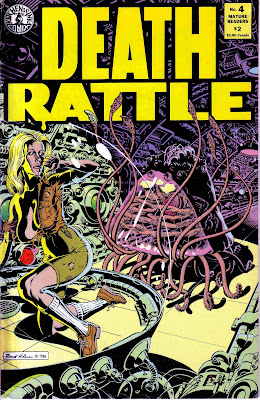 Here's yet another Wood homage cover from the late Rand Holmes, this one from Denis Kitchen's eighties revival of SNARF. If Homes had been able to draw humans as well as he did everything else, one might presume this to BE Woodwork!
Posted by Booksteve at 11:02 PM 2 comments: 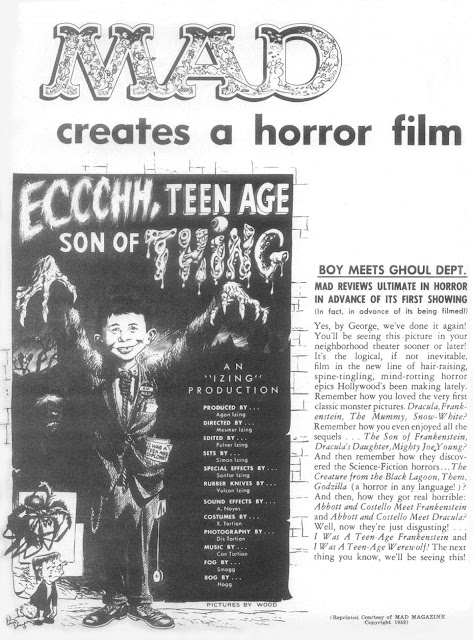 From the 2nd issue of FAMOUS MONSTERS OF FILMLAND way back in '58. 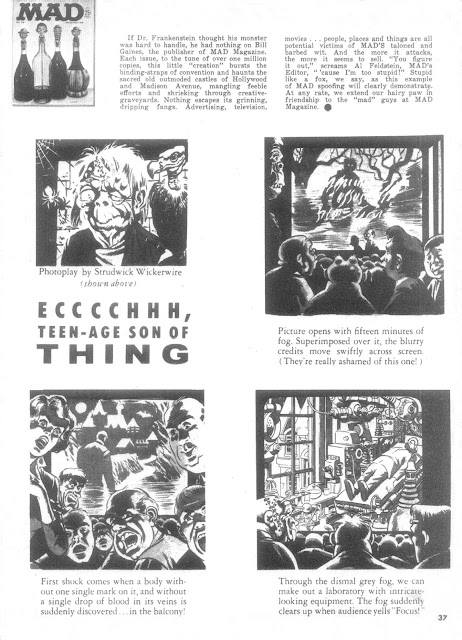 They Came From Uranus-Paul Kirchner-1977 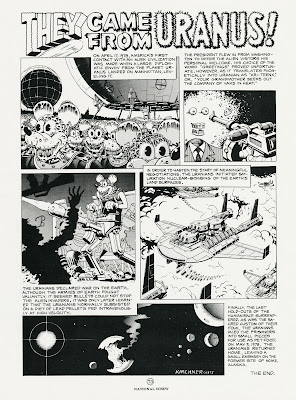 Wood's MALICE IN WONDERLAND and FLASHER GORDON appeared in NATIONAL SCREW in 1977. Woodworkers Al Sirois and Paul Kirchner also got strips in some issues. Here's the latter with an EC-style sci-fi parody with a bit of an underground feel. It's dated 1975 so was most likely done with a different intent as this mag didn't yet exist. Some obvious Wood influence here.
Posted by Booksteve at 10:04 PM No comments: