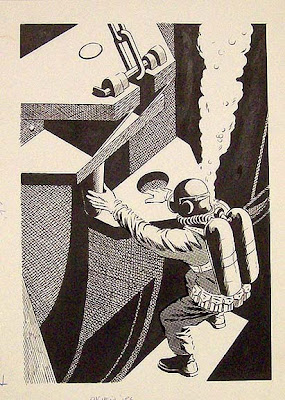 Again thanks to Ronn Sutton!
Posted by Booksteve at 5:45 PM No comments: 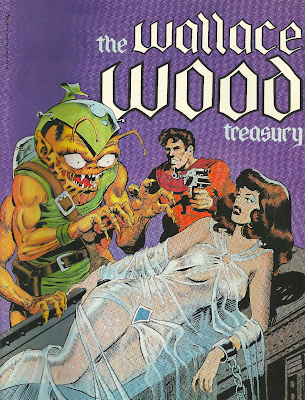 From 1980, this is Greg Theakston's WALLACE WOOD TREASURY, the first of a number of Wood-related books put out by Pure Imagination over the years. At the time this one came out, however, Woody was still alive and as I recall he was not happy with its publication. Someone feel free to correct me but I believe he was hoping at the time to publish a similar book himself.
The years have been quite kind to this Treasury, however, as it hold up very nicely today.
The first half of the book consists of a bio and interviews with former Woodworkers Joe Orlando, Dan Adkins, Ralph Reese and Paul Kirchner. The latter half reprints a number of still rarely seen pieces of artwork and ends with a full reprint of Wood's signature EC classic, MY WORLD. Good stuff, indeed. Thanks, Greg!
Posted by Booksteve at 8:47 PM 1 comment: 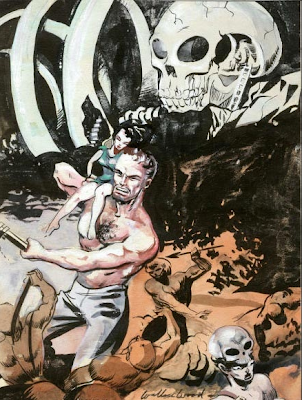 Found on the Net.

Posted by Booksteve at 1:52 PM No comments: 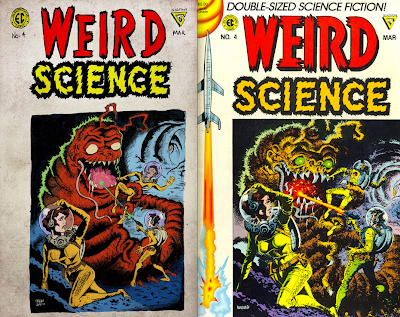 COVERED is a fun site where various artists are asked to redraw covers of comic books old and new. Some choose a traditional approach, others an artsy variation. Always interesting and clever interpretations. Here's a Wood tribute from the site, one of several there. Enjoy!
http://coveredblog.blogspot.com/
Posted by Booksteve at 7:58 PM No comments: Hoax by Cuti and Kirchner 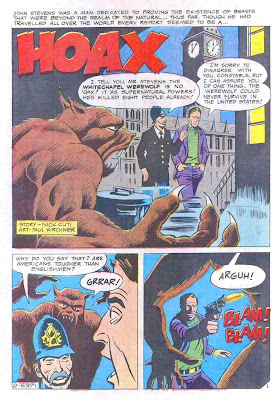 Woody had absolutely nothing to do with this story from a mid-seventies issue of Charlton's SCARY TALES and yet his influence is all through it. Written by former collaborator Nick Cuti, it's drawn by another former Woodworker, Paul Kirchner, in one of his rare solo turns on a mainstream comic story. 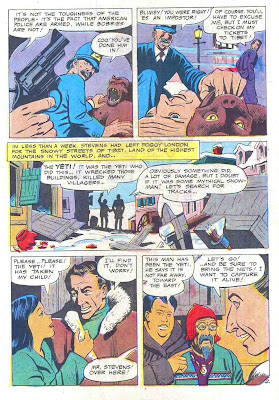 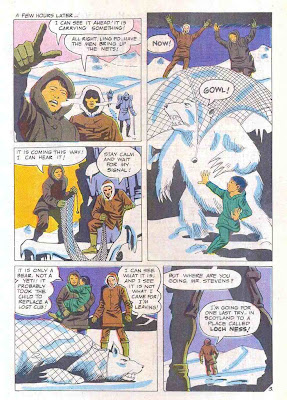 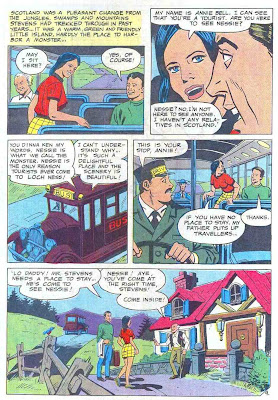 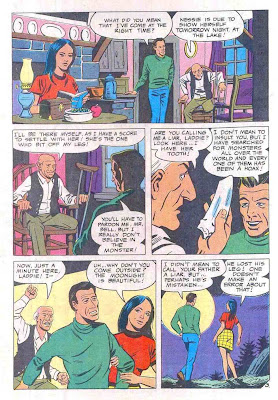 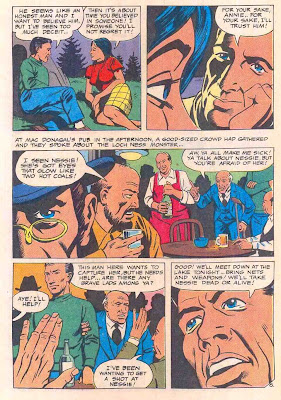 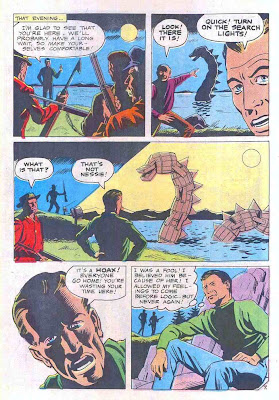 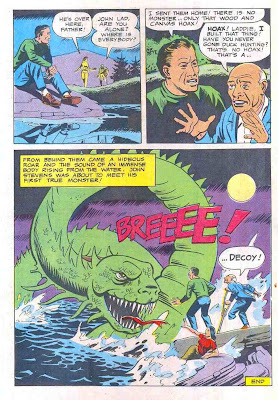 Posted by Booksteve at 8:43 AM No comments: 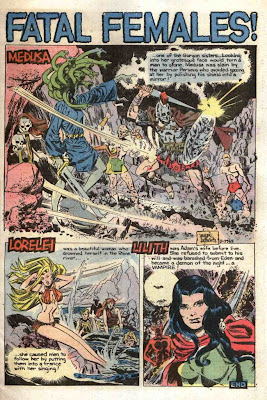 Here, from Charlton's 1980's title, SCARY TALES, we have a one pager from former Woodworker Wayne Howard whose work usually seemed a conscious imitation of his mentor's. To me, in this case, it looks much more like the work of Joe Staton whose art was revitalizing the low rent company at the time through E-MAN and various anthology titles.
Posted by Booksteve at 9:56 PM No comments: 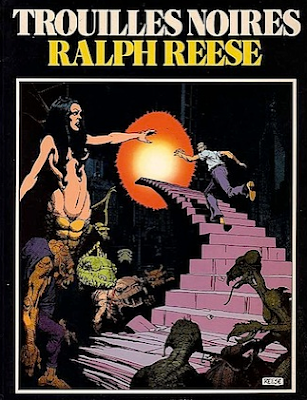 There's a benefit auction coming up to help former Woodworker and longtime cult favorite artist Ralph Reese and also onetime MAD Comics contributor Russ Heath. Go here for details and help out of you can.
http://www.comicsbeat.com/2010/08/05/caps-auction-to-benefit-heath-and-reese/
Posted by Booksteve at 1:57 PM No comments: 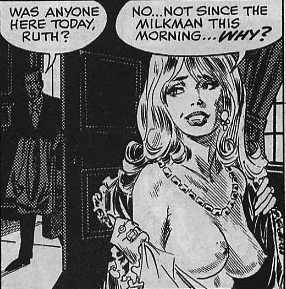 CLOUD 109 offers up the story behind the aborted Warren magazine Woody came up with that was to be entitled THE POW SHOW. Also we get some behind the scenes comments form Nick Cuti and a reprint of the only story Wood completed for the project, inking over pencils by the great Ernie Colon.
http://cloud-109.blogspot.com/2010/08/pow-another-woody-could-have-been.html
Posted by Booksteve at 10:43 AM No comments: 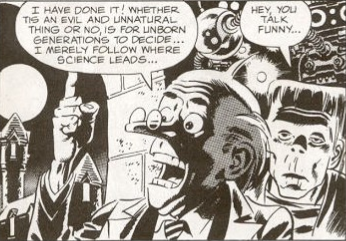 Just a nicely drawn and lit shot from Woody's SALLY FORTH!
Posted by Booksteve at 10:09 PM No comments:

Encounter by Wood with Pat Boyette 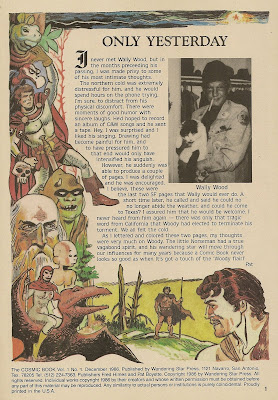 THE COSMIC BOOK was a one-off independent comic put out by artist Pat Boyette during the eighties boom. It came out 5 years after Woody's death but was advertised as containing his final work. What we get is a two page derivative sci-fi piece that looks surprisingly good for late Wood art. Based on a later publication without Boyette's wonderful painted colors, one sees that it really wasn't particularly impressive.
Thanks to Pat's work on those two pages, though, Wally Wood, one of THE sci-fi masters of the 2oth century, gets one last hurrah. 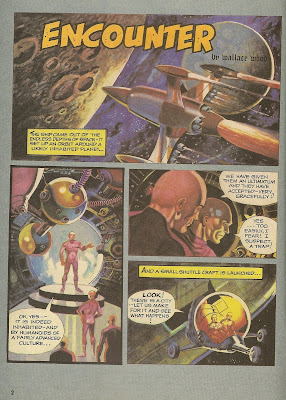 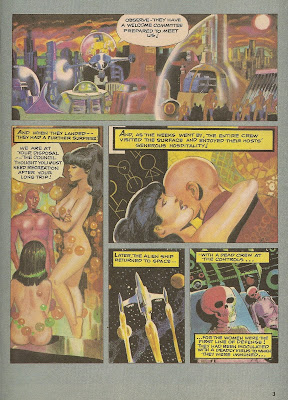 Posted by Booksteve at 1:37 PM No comments: