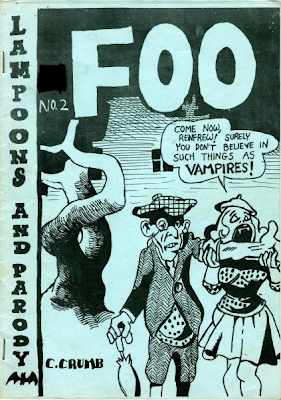 The other day, we ran a link to Wood's "V-Vampires" art at Pappy's. Here's an ultra-rare early homage to that story on the cover of an issue of the Crumb Brothers' homemade FOO comic. This particular cover was drawn by older brother Charles whose comic book obsession is said to have been quite an inspiration to Robert. In the first issue of BLAB, Robert joined many underground artists in crediting MAD as an early influence. Wood would later unknowingly (it's assumed) co-opt FOO as an acronym for his Friends of Odkin fan club. Charles Crumb would suffer all his life from mental illness and committed suicide in 1992. Even then, he attained a kind of posthumous fame from scenes filmed earlier for the film, CRUMB, a popular documentary on Robert and his work.
Posted by Booksteve at 12:35 AM