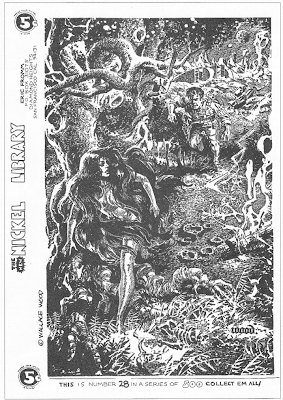 THE NICKEL LIBRARY was a fun idea that was done under somewhat shady circumstances and never got anywhere near its planned 500 issues. Basically, each one is one page, costing a nickel, highlighting a cool, rare comics-related image. The goal was to have 500 which one could then collect and store in a binder. Wood appeared several times including with this highly detailed piece probably from or intended originally for one of the digests.
Posted by Booksteve at 11:51 AM