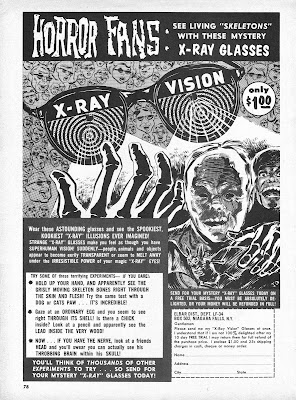 Did you ever notice that this ad for the ever-popular X-Ray Glasses that were long a mainstay of comics and magazine advertising in the sixties was drawn (and signed with his initials) by former Woodworker Joe Orlando? The ad was seen in Warren magazines from 1965. This was the period when Woody was working with Russ Jones at Warren on projects like HORROR AT PARTY BEACH and the comic strip adaptation of THE MUMMY. A comic strip adaptation of HORROR OF DRACULA also appeared and was done by Jones and Orlando. So even though Wood and Orlando didn't technically reunite at Warren...it was close!
Posted by Booksteve at 9:59 AM