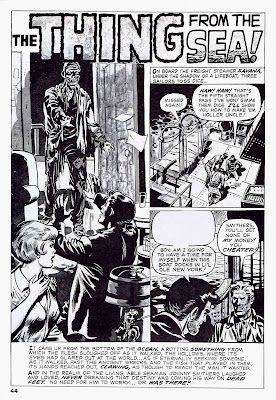 When I saw Terry Beatty's reprinting of Wood's 1950's EERIE COMICS tale, THE THING FROM THE SEA, the other day, I commented that it looked much better in color. One reason for that may be that I had never actually seen that story before. Not exactly anyway. Oh, I thought I had, mind you! I haven't checked but Im pretty sure THE THING FROM THE SEA has been reprinted in black and white by Bill Black's AC Comics as well as in at least a couple of publications from Greg Theakston's Pure Imagination. I skipped them, though, because I hadn't liked the story all that much when I had first seen it...in Skywald's NIGHTMARE # 1 from way back in late 1970. 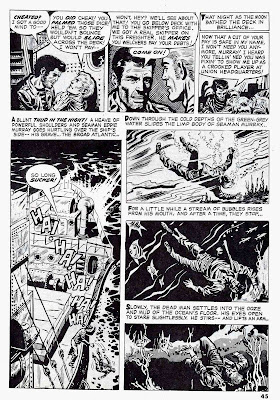 Skywald--to make a long story short--was a relatively short-lived but worthy competitor to Jim Warren's line of EC-inspired horror magazines, CREEPY, EERIE and VAMPIRELLA. One of the folks behind it was Israel Waldman, the "IW" in the IW/Super Comics line that existed from the late fifties through the mid-sixties and simply republished (with more than slightly questionable legality) old comic books with new covers...all because Waldman had bought the plates for the originals.
Thus when he started his new horror mags, NIGHTMARE and PSYCHO, it should be no surprise that he was still reprinting some old stuff mixed in with the new. The first issue of the line, NIGHTMARE # 1, featured THE THING FROM THE SEA. 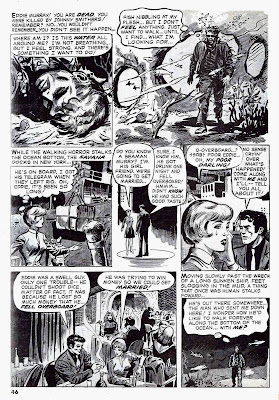 Now, to be fair, they didn't credit it as being by Wood. In fact, they didn't credit it at all. Much of the rest of the book was made up of new stories and art by Friedrich, Wolfman, Everett, Shores, Heck and other Marvel expatriates.
The reason they couldn't really say THE THING FROM THE SEA was by Wally Wood is that--in this case--it wasn't! Not completely anyway. Every single page has either been traced by another artist or else very heavily retouched! The young, long haired female character is the most obvious change, now looking slightly older and with a shorter, more modern looking hairstyle.
The machine lettering has been replaced also. The fact that some of the word balloons remain in the same place, leading to such unusual situations as one being left blank at the beginning, make me think that this is, in fact, the Wood original, simply over-tweaked for whatever reasons by someone else. But then some panels show little or no trace of Wood! My first thought for the new artist was Dick Ayers but Terry Beatty--who knows such things better than I--disagreed. My second thought is the recently deceased Mike Esposito and I'm pretty sure that's correct. Esposito is, in fact, credited solo on the contents page for SOMETHING in the issue as well as with longtime partner Ross Andru. 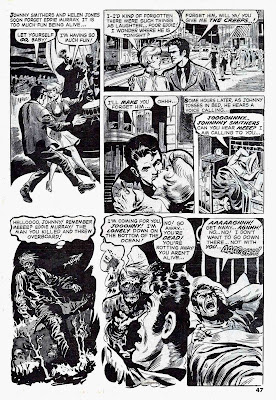 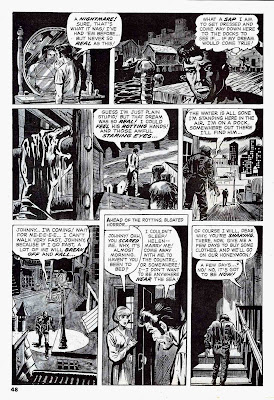 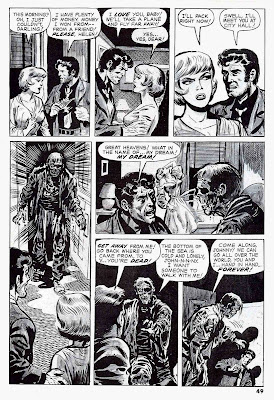 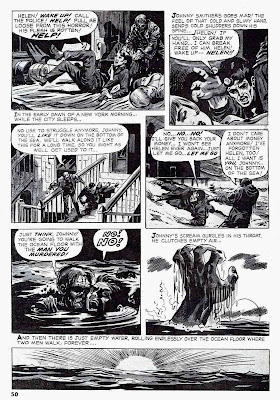 So anyway, for whatever they were trying to do here, it really isn't a terrible job. It's just that when you have the Wood original, why do anything at all but enjoy? Thus my surprise when I saw how much better Woody's version is. Check it out yourself in its entirety at Terry Beatty's blog here: http://terrybeatty.blogspot.com/2010/11/wally-wood-thing-from-sea.html
Bring 'em up side by side and compare!
Posted by Booksteve at 5:30 AM