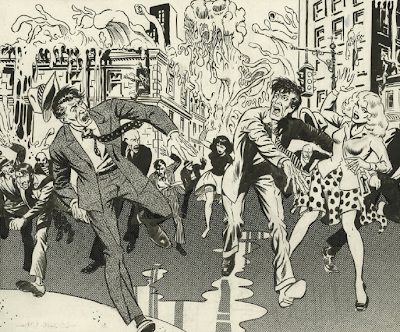 One of the first artists to be strongly influenced by Wallace Wood was Sid Check in the early 1950's. In fact, Check was SO influenced by Woody that the untrained eye has sometimes mistaken the two. At a closer look, one easily sees that Check's work is cruder--sketchier--and his storytelling skills were not developing at the same pace as Wood's. Here, Pappy presents a couple of Check tales, one from the original art.
http://pappysgoldenage.blogspot.com/2011/05/number-945-check-and-double-check.html
Posted by Booksteve at 6:52 AM