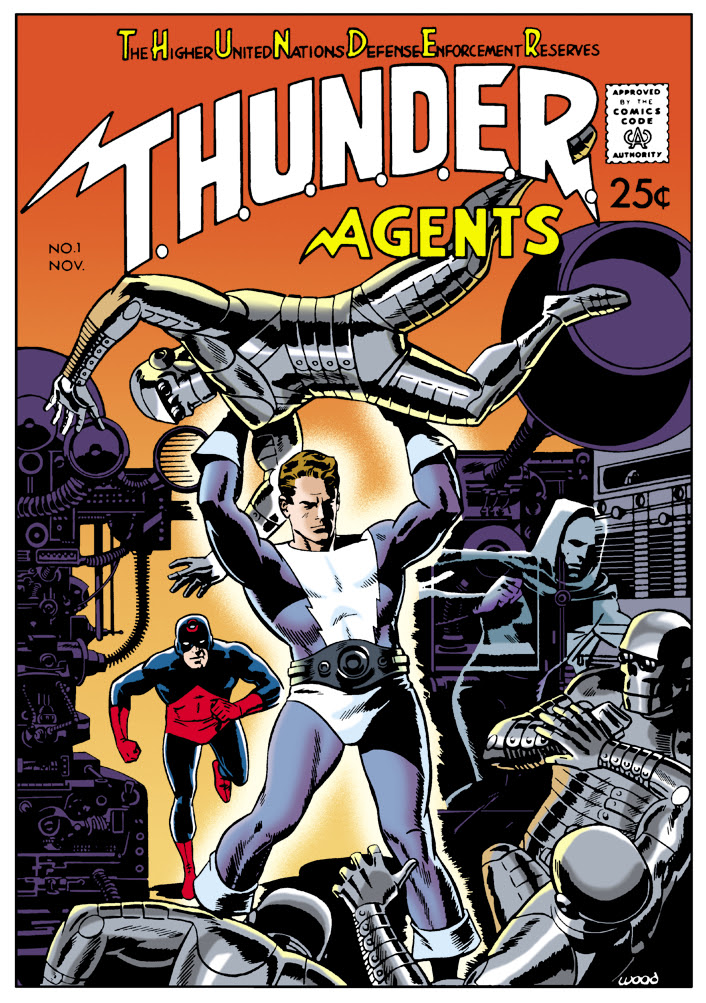 First published in 1965, the fan-favorite team has seen their exploits published by Tower, JC, Deluxe, and DC Comics and been written and drawn by a virtual who’s-who of comic industry titans. The diverse cast of Agents have seen their share of adventures over the years—including DC’s well-received run most recently—but IDW is excited at the opportunity to put their stamp on the legendary team. “I'm thrilled that IDW will be bringing its extraordinary talents and craft to producing everything from beautiful omnibus volumes to bold and cutting-edge new comic book titles based on T.H.U.N.D.E.R. Agents,” said Michael Uslan, who initiated the project.  “With top quality, IDW will be presenting the works of comic book super-stars, including T.H.U.N.D.E.R. Agents creator, Wally Wood(Daredevil, MAD, EC horror and science fiction comics, All-Star Comics,Power Girl) along with the legendary Steve Ditko (Spider-Man, Dr. Strange); Gil Kane (Green Lantern, The Atom); Mike Sekowsky (Justice League); Reed Crandall (Blackhawk); Dave Cockrum (X-Men); George Perez (Wonder Woman, New Teen Titans); Murphy Anderson(Hawkman, The Spectre); Paul Gulacy (Master of Kung Fu); Jerry Ordway (Shazam, Justice Society); Ron Lim (Warlock, Silver Surfer),Keith Giffen (Legion of Super-Heroes, Lobo); Dan Adkins (Creepy, Dr. Strange), and many others.” “T.H.U.N.D.E.R. Agents always had a great premise in addition to the list of esteemed creators who worked on the comics—people whose day job was being government-employed superheroes,” said IDW’s Chief Creative Officer/Editor-in-Chief Chris Ryall, “That premise offers a resonant jumping-off point for some exciting new stories that will add to the great comics already left behind by both Tower and DC’s recent run.” “T.H.U.N.D.E.R. Agents is a classic, beloved property,” added Greg Goldstein, IDW's President and C.O.O.. “Its original stories featured some of the best superhero art of the silver age and it was well ahead of its time in many areas of storytelling. As an example, it was the first mainstream comic book to feature the ‘permanent’ death of a major character.” In addition to the rights to reprint classic T.H.U.N.D.E.R. Agents comics as well as create all-new series around the property, IDW also now controls the rights to fellow Tower Comics titles Undersea Agent and Fight the Enemy, too. “We are very excited that T.H.U.N.D.E.R. Agents has found a new home at IDW,” said David M. Matthews, Managing Director of Radiant Assets, owner of the property.  “Their history of high-quality publications coupled with top-notch creative teams perfectly compliments our desire to expand not only the T.H.U.N.D.E.R. Agent franchise, but Undersea Agent andFight the Enemy, as well.  We join them with great optimism about bringing this storied team’s past, present and future to a whole new generation of readers, who will join the longtime legion of fans already anxious for the continuation of the team’s legendary exploits.”  Though specific plans have yet to be revealed, 2013 is looking to be a mighty year for the T.H.U.N.D.E.R. Agents!
Posted by Booksteve at 12:24 AM