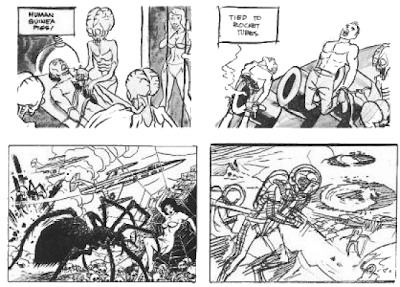 Here's some of Woody's design work for the legendarily tasteless MARS ATTACKS bubblegum card series from the early sixties. Topps had gone to Wood for some initial design ideas but the actual later work would be done by comic artist Bob Powell and illustrator Norm Saunders (who would also do the legendary BATMAN cards in 1966). Wood's surviving sketches would be published as a portfolio in the early 1980's.
Posted by Booksteve at 1:52 PM