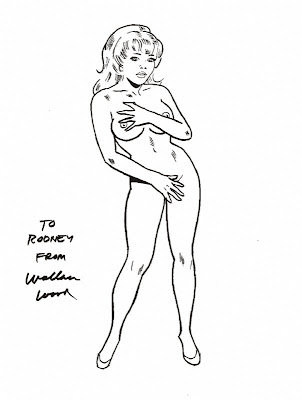 Here's someone's SALLY FORTH FOO sketch as found on the 'Net. One of the perks that got a lot of Wood fans to join Wally's late-in-the-day fan club, FRIENDS OF ODKIN, was the promise of an original sketch of either Snorky, Sally Forth or Nudine, all characters Wood owned. It was some months after joining when mine arrived--a totally different pose than this one--and some years before many of us fans realized just how ill Wally was becoming at that time. I started to question how he was able to pull it all together to do such smooth sketches if that were the case. When I quuestioned it in public and postulated my theory that perhaps former Woodworker Paul Kirchner had been involved, Mr. Kirchner responded:
Hah! I just came across your page while I was sitting here Googling myself. Yes, it's shameful but we all do it.

Before I forget, you mentioned your Wally Wood sketch, one of those he gave out with memberships to Friends of Odkin. Should I say it? Why not: I traced off almost all of those for $2 apiece and Woody signed them. I've seen them sell on ebay for $150, so God bless us all!
Thanks for the truth, Paul. I still treasure mine.
Posted by Booksteve at 7:04 PM