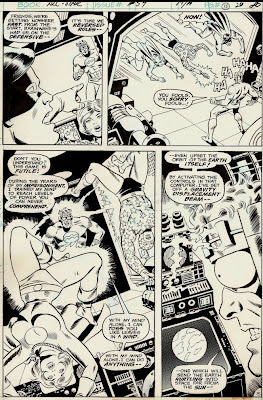 The 1975 revival of ALL-STAR COMICS was the very first time I had heard of atist Ric Estrada who passed away this week. I found out later that that was an oversight on my part. Estrada had been around as early as the EC days and had a long career in romance comics for various companies. According to Mark Evanier, Estrada felt out of his element when it came to super hero comics. Nonetheless he was drafted to do light pencils for the long-awaited new Justice Society comic, with inks to be provided by Wally Wood. A few years ago, Roy Thomas asked Mr. Estrada how he felt about the prospect of being inked by Wood."Very happy," he said,"because Wally Wood is one of the big names in the industry. I think everybody admires him and loves his work. I felt that would enhance the value of my work, and it did." There is apparently some question as to who created Power Girl who debuted in the ALL-STAR revival. Although often attributed to Wood (for perhaps obvious reasons)there is evidence that it might have been editor (and former Woodworker) Joe Orlando or perhaps Ric Estrada!
Estrada also had a long run on RICHARD DRAGON, KUNG-FU FIGHTER where, for several issues, he found himself once again in combination with Wally Wood.
Seen here as found on the 'Net is one of the early Justice Society pages done by the team of Estrada and Wood.
Posted by Booksteve at 11:12 PM