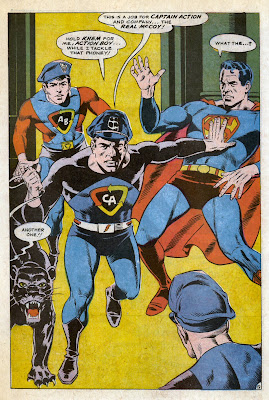 CAPTAIN ACTION was one of the toy sensations of 1966 and 1967. A superhero GI JOE in a way, Cap was an action figure whose add-ons were actually superhero costumes for a variety of other cross-company characters from Batman and Steve Canyon to Spider-Man and Buck Rogers. A tie-in comic would seem impossible because of the different companies involved. I guess that's why it was late '68 when the tie-in comic finally appeared with a backstory that 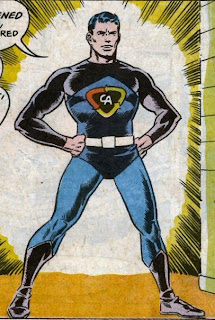 simply took the basic character's visuals and made up everything else. Unfortunately, by 1968 the moment had passed and Ideal's Captain was no longer particularly popular.
Issue one was scripted by DC's boy wonder, Jim Shooter and drawn and inked solo by Wally Wood! Some really nice work from his late sixties DC stay that was mostly inking. In fact, with issue two, Gil Kane took over the pencilling while Shooter still scripted part two of the tale of the Captain and the magic coins that give him power. The Kane/Wood combo is always a good one and Kane is in particularly good form in CAPTAIN ACTION. In fact, Kane apparently enjoyed it so much that with issue three he took over the scripting chores, also, while Wally continued the inks. Issue four is almost a one-man job with script, pencils AND inks by Kane "with an editorial assist by Julie Schwartz." Assist? You mean Kane was editing it by the point, too!? Woody was back inking Gil for the final issue, number five. The whole brief run is a fairly self-contained (except for a brief Superman cameo in issue one to justify putting him on the cover), nicely drawn and sometimes emotionally affecting series. It'll probably never be reprinted as DC has long since lost the rights. There's a new and not too bad CAPTAIN ACTION series now but it's a different guy. Not the same. Good art, though...but no Kane or Wood. Too bad.
Posted by Booksteve at 3:29 PM