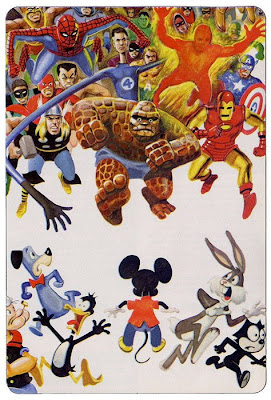 The March 23, 1968 edition of TV GUIDE featured an article about how violent comic book heroes (as well as comic book LIKE heroes) were taking over the Saturday morning cartoon crowd from the traditional funny animals (and POPEYE). To illustrate this article, they turned to a comic book artist not really associated with either comic book super heroes OR funny animals--Wallace Wood. Makes sense to me. That said, this became one of Woody's most widely seen and reprinted illustrations and gave him the opportunity to draw more super heroes at once then he ever had before or afterwards. Although often found in black and white, here's the color version courtesy of CAL'S CANADIAN CAVE OF COOLNESS at http://calvinscanadiancaveofcool.blogspot.com/
Posted by Booksteve at 7:30 AM