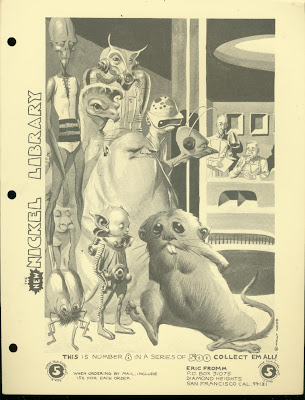 THE NEW NICKEL LIBRARY was a long series of one sheet publications from the pseudonymous "Eric Fromm"--actually somewhat controversial San Francisco comics dealer and underground publisher. Printed up in the early seventies and sold for a nickel, they featured whatever stray art Gary had access to. Sometimes the art was from the hippie artists of the era, other times from the likes of Will Eisner, Frank Frazetta and Wally Wood.
Seen here is Wood's first appearance, on issue # 8. The encyclopedically knowledgeable Ronn Sutton informs that it was originally seen in a 1958 GALAXY illustrating Robert Silverberg's story, "Birds of a Feather."
Posted by Booksteve at 9:33 PM