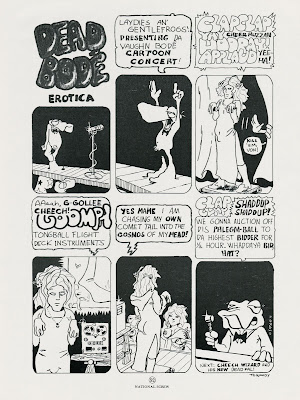 This particular piece is clearly both an homage and a dark-humored tribute to the late artist Vaughn Bode' who had accidentally killed himself not long before. Noting that the piece was dedicated "To Woody," I then noted the signature as that of A.L. Sirois, Wood's assistant during this period whom we already know had helped out on the MALICE strip.

I contacted Al for the story behind this tasteless li'l tribute and asked if he and/or Wood were Bode' fans.

"Tasteless… yeah, well, no one is perfect. That was my first professionally published piece of comic work, and I'm sure NS published it only because I was working for Wood and they were courting him. I don't recall Woody coming down on one side or the other about Bode's work. I was a big Bode fan myself, believe it or not, but inclined to be more than a little iconoclastic in my youth. A lot of people seemed to find that piece funny. I did a number of other strips for NS, all of them pretty tasteless."

Posted by Booksteve at 8:48 AM