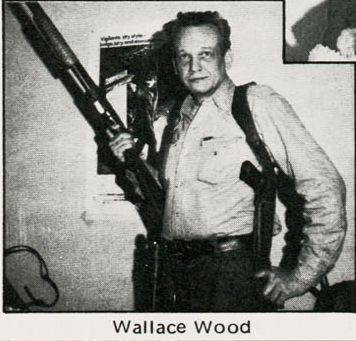 A controversial picture of our hero considering his ultimate demise, this was the "contributor" photo of Woody that appeared in the second issue of Al Goldstein's NATIONAL SCREW featuring MALICE IN WONDERLAND.
Speculation when I posted this on Facebook arose as to Wood's politics. Obviously, he collected guns. He also liked country music. Did those two things point toward his being a Republican or, as one person said, was he in spite of these bits of circumstantial evidence, a "liberal democrat, Minnesota born and bred?"
It matters not either way as we are all here for love of his his art, not his politics, but those of you who knew him, chime in. Was he a red or blue? A libertarian? An independent? Or did he just not give a damn? Just curious.
Posted by Booksteve at 8:54 AM