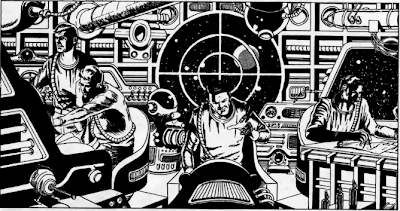 Interesting piece by Bill DuBay, originally published as fan art in an early issue of CREEPY. DuBay would go on to become an artist, writer and eventually editor at Warren and, in spite of his here obvious appreciation of Wood, he would become a major thorn in the artist's side in his later years and the subject of rants in THE WOODWORK GAZETTE.
Posted by Booksteve at 6:31 AM