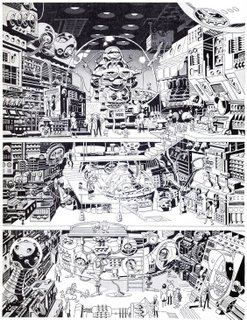 Originally published at Booksteve's Library in March of 2006

When I joined Wallace Wood's official fan club, the Friends of Odkin (FOO) in the late seventies, one of the cool things the artist sent along with his basic membership kit was a leftover copy of an outdated portfolio he had made up for advertising agencies. Inside were random style samplings from sci-fi digests, comics, fanzines, children's books and toys. As a Wood fan, many of these were pieces I had seen before. One that I had not seen nor have I seen it anywhere since was this one. This is described in the portfolio as "Scandinavian Airlines announces Europe's first fully-computerized thing." Zoom in on this sucker and you'll find enough Woody goodness here to keep you occupied for awhile. Enjoy!
Posted by Booksteve at 5:44 AM