The Most Original Superhero of All? 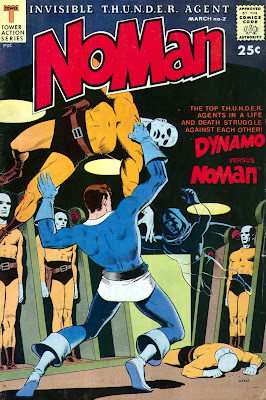 Scientist Doctor Dunn worked for a secret organization known as T.H.U.N.D.E.R. (The Higher United Nations Defense Enforcement Reserves). Old and dying, he transferred his consciousness into a lifelike android he had created. He was then entrusted by the organization with a cloak that imparted

de facto invisibility to its wearer. Thus was born the 1960’s Tower Comics character NoMan, one of the few truly unique superheros in all of comicdom. Doctor Dunn was able to transfer his consciousness at will between various android bodies but there was only one invisibility cloak so he was constantly having to salvage it.
Other T.H.U.N.D.E.R. Agents included Dynamo (a Superman type with a belt that gives him super-strength), Lightning (a Flash type whose use of his speed powers speeded up his life, also) and Raven, a Hawkman type. NoMan, though, was unlike any other hero who came before him.
NoMan appeared as Ilya to Dynamo’s Napoleon Solo in twenty issues of T.H.U.N.D.E.R. AGENTS and four issues of DYNAMO as well as in two of his own self-titled comic. Although never as popular as the Marvel or DC heroes of the day these hybrid spy/sci-fi/superhero t

ales are fondly remembered collectors items today. Despite a solid premise, they were always a bit light in the writing area but oh, that artwork! With Wallace Wood as their co-creator and guiding light, the Tower heroes also featured memorable work by Gil Kane, Steve Ditko, Reed Crandall (who did the very first NOMAN story), George Tuska and Mike Sekowsky, all of whom were working for other publishers at the time 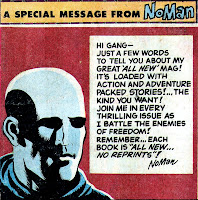 . Also present were veteran artists Ogden Whitney, Manny Stallman and the younger Dan Adkins who, as I understand it, actually ghosted Wood’s work sometimes in these comics.
Revived intermittently over the years (both legitimately and illegitimately), the Agents have suffered from major legal headaches which have kept them pretty much relegated to cult status. Most recently, DC has reprinted these original tales in their overpriced Archives series. If you’re tired of cookie cutter heroes, look for the reprints or better yet, track down the originals on these to check out NoMan!
Posted by Booksteve at 5:53 AM