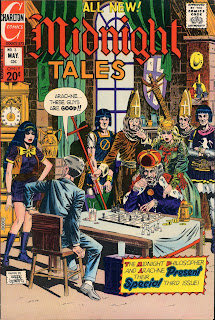 Artist Wayne Howard (who died recently) was one of the first African-American artists to be successful in the comics industry. He had started out as an assistant to Wallace Wood and that shows in every line of his artwork. His machines were detailed, his women full-lipped and voluptuous, his monsters disgusting, his layouts mar 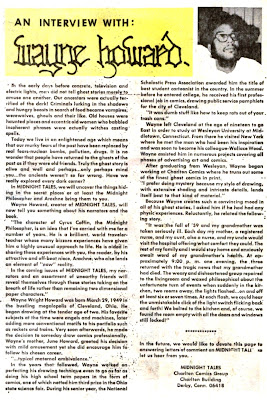 ked by zipatone use and even his signature was a poor man's variation on Woody's trademark gothic lettering. Most of Wayne Howard's professional career was spent at the low-rent Charlton Comics and peaked in the mid-seventies with the tongue-in-cheek horror title, MIDNIGHT TALES. The first issue featured an About the Artist page that for some reason barely mentions Wood in spite of the fact that sometimes Howard's Charlton covers looked so much like Woodwork that one had to look close to tell they weren't!
Posted by Booksteve at 7:30 PM