When Wood Was King-Rare Art 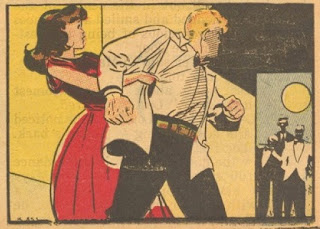 By all accounts, he truly hated being called "Wally". In fact, his close personal friends called him "Woody". He is generally considered one of the best and most influential comic book, science-fiction and humor artists in spite of a long track record of using assistants and a steadfast refusal to ever completely go commercial. He also harbored more than his share of personal demons but he always loved dra 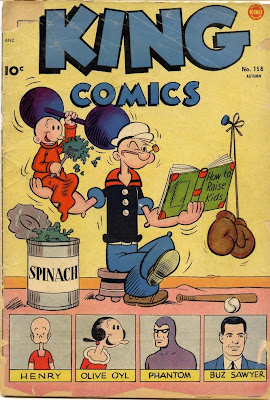 wing! Look closely at the above panel and you'll see that it's signed "Woody". This particular panel comes from the issue of KING COMICS at your left. Some years ago as I was passing through one of my infrequent Popeye phases, I picked it up for the strip reprints only to discover the Wood artwork accompanying the mandatory text story. (Why was the text story mandatory in an otherwise all strip reprint title, you ask? Let's just say ridiculous postal regulations that saved comics companies a ton of money and leave it at that.)Noting that this illo did not appear in any checklists of Wood's artwork that I had...including his own "official" listing, I knew that I had something special. Assuming that this was probably not Wood's ONLY contribution to KING, I began searching for affordable copies of surrounding issues but they're rarer than whiffle hens and I never was able to check for more! When Bhob Stewart came out with his "Complete" version of a Wood checklist a few years ago, I heard about it too late to contact him in time but he was delighted to see this rare piece and said it would definitely be included in any update! Speaking of Woody and his assistants, toward the end of his life, he formed a personal fan club a 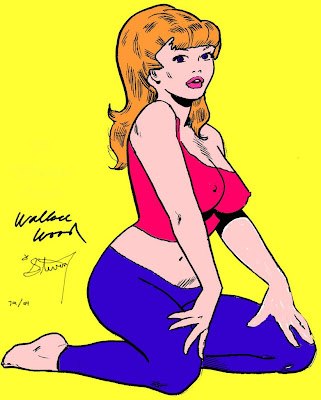 nd agreed to provide original illustrations to all who joined the Friends Of Odkin (FOO). I joined and for years have treasured my original nude pin-up illustration of Wood's SALLY FORTH character...only to have Bhob assure me that it was probably actually drawn by an assistant, perhaps Paul Kirchner, then signed by Wood, himself. Kirchner himself later wrote to me and confirmed this. Sigh. Wally, ya big lug, you! I scanned it, put some clothes on the girl (Hey, it gets cold, y'know?) and colored my SALLY and here she is to share with you.
Posted by Booksteve at 1:51 PM