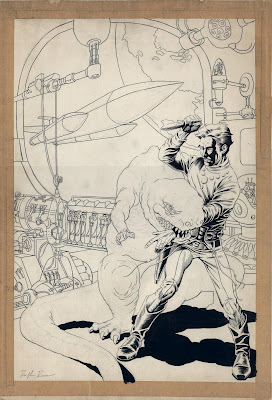 Here's a piece of signed Ralph Reese art sent to me by Larry S who's attempting to identify it. It definitely looks like an EC homage. Or maybe that's Flash Gordon? Was it for anything in particular and was a version of it ever used? I know some of you will have some idea.
BTW--Speaking of Mr. Reese, I just watched the 1970 TV documentary THIS IS AL CAPP and Reese is featured as an "underground cartoonist" along with Spain, Trina and Kim Deitch, none of whom Mr. Capp was a fan.
UPDATE--Almost as soon as I posted it I remembered why it looked familiar. It was--as drawn by Al Williamson with a different background, the cover to the Williamson fan mag, THIRD RAIL. 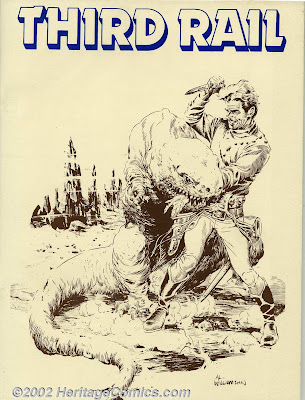 Posted by Booksteve at 5:37 PM