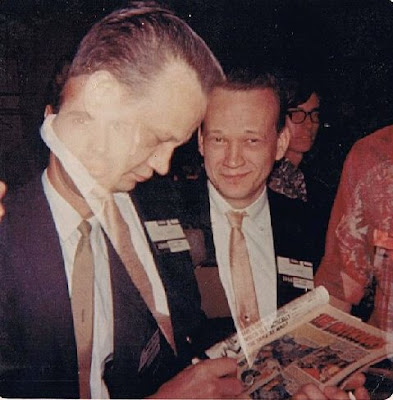 Here we have a delightful and delightfully odd photo of a smiling Wally Wood. I'll let writer/editor/educator Jack C. Harris (who generously provided this unknown shot) give you all the details. Jack writes, "Here's a strange photo. At first, it appears to be a clever front-and-side view of Wally Wood signing an issue of Weird Science Fantasy for me back at a 1966 John Benson New York City Comicon. However, it's actually a mistake. I took a picture of Woody first and forgot to advance the film, so I double exposed it over the next photo--which is of Woody and Al Williamson. If you look close, you can see Al beneath the left image of Woody."
A decade after this magiical shot was double-snapped, Mr. Harris would, of course, be a fixture at DC during Wood's last great hurrah in mainstream comics! Many thanks for sharing, sir!
Posted by Booksteve at 12:46 PM