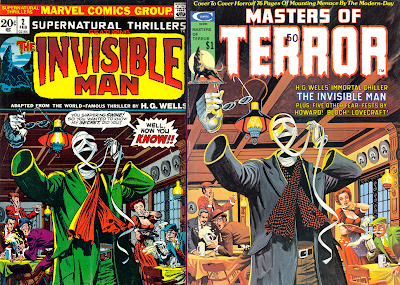 In the early seventies, Marvel Comics adapted the classic Wells story of THE INVISIBLE MAN and the great Jim Steranko, during his covers-only phase at the company, did this eye-catching line art on the left.

A few years later Marvel reprinted the story in their black and white line but needed a painted cover rather than pen and ink so they called on former Woodworker Dan Adkins to translate Jaunty Jim's original work into a cover painting. The result is seen at right.
Posted by Booksteve at 8:09 PM