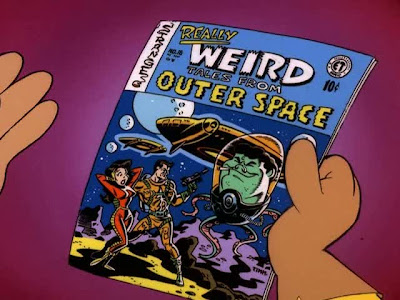 Here is a screenshot from an episode of the 1987 TV cartoon series, THE NEW ADVENTURES OF MIGHTY MOUSE. This was the hipper than hip series made by veteran Ralph Bakshi with a young John Kricfalusi, later known for REN & STIMPY. Note that the cover is "signed" Timm. Was this drawn by Bruce Timm, later known for his great design work on so many of the DC TV animated projects. And who is the green guy, presumably a parody at a real person?
Posted by Booksteve at 12:26 AM