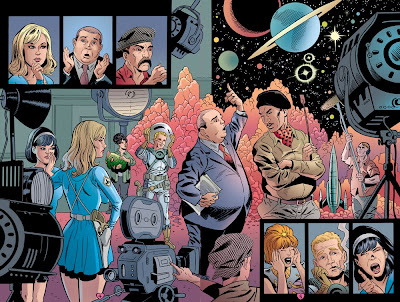 Artist Ronn Sutton has done and continues to do a lot for the Wally Wood blog and Wood fandom in general. I'd appreciate it if you'd consider taking a look at HIS latest project, HONEY WEST!
Press release follows:
This storyline runs through Honey West issues #3, 4 & 5, after which time artist Ronn Sutton will be penciling and inking some other Honey West projects in 2011. "I'm currently wrapping up the artwork on my third issue" comments Sutton. "I've spent a lot of time drawing these issues, so to speed things up a little I've brought in a model with a belly dancing and burlesque background to help me create all the major Honey West poses in issue #5".
The character Honey West was created in the late 1950s by Gloria and Forest Fickling for a series of detective novels that they would write until 1971. In 1965, Anne Francis starred in a Honey West tv series after the character first made a brief appearance on the Burke's Law tv show.
"I'm having a lot of fun working on these issues" Sutton said. "In the original novels Honey West was a much sexier character than she was portrayed on television. So I'm trying to re-instate that. The story takes place in 1965 and I've worked hard to visually recreate that era: the hairstyles, clothes, furniture, etc. The mid-60s was also probably the last hurrah for that very girly-girl sex kitten image. That's what I'm trying to bring to my version of Honey. She's very alluring, well-built and she's always on the verge of spilling out of her clothes".
Sutton knows a fair bit about drawing sexy women after having drawn issues of Claypool Comics' Elvira, Mistress of the Dark for nine years. Prior to that he had worked on a number of other female protagonists such as Draculina, the vampress Luxura, a Vampira movie comic, and She-Dragon (for the Savage Dragon animated tv series).
"I'm attempting to portray a very specific look, something that was fleeting and now is long gone. But you see a certain sexiness in the way women dressed then, the way they walked, a particular sort of sexy sophistication that disappeared when Go-Go, hippie and unisex styles invaded".
Honey West is published by Moonstone Books. Each issue is 32 color pages for $3.99. The comic ships with three variant covers including one photo cover of Honey West actress Anne Francis who passed away on January 2nd 2011. Script by Elaine Lee, pencil & ink art by Ronn Sutton, colors by Ken Wolak.
Posted by Booksteve at 6:12 AM