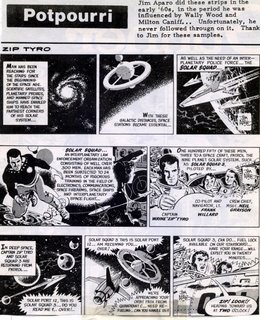 Adapted from a post at Booksteve's Library in June of 2006
Comic book artist Jim Aparo never seemed to get enough respect when he was alive. My wife and I met him in Chicago at one of the first conventions he'd ever done and he seemed starved for attention. A nice man, very talkative and friendly, his death in recent years brought some people to the belated realization that his Batman was the definitive seventies version. Here are some sample comic strips that originally appeared in the late, lamented, absolutely marvelous weekly comic strip newspaper 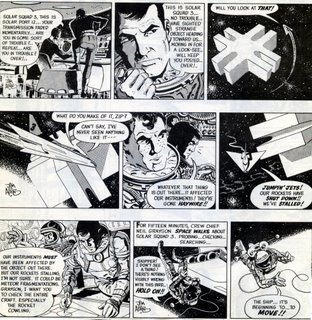 THE MENOMONEE FALLS GAZETTE. ZIP TYRO was an unsold sixties comic that bore some resemblence to England's JEFF HAWKE astronaut comic strip. Considering the time, it may also have been inspired by Kirby and Wood's SKY MASTERS OF THE SPACE FORCE. Note the introductory comment which points out that these early sixties samples were done during the a period in which the artist was influenced by Wally Wood and Milton Caniff. That influence is seen largely in the background equipment in a few panels. You can see that Aparo's distinctively classy signature is already present. If ZIP TYRO had been successful at all Jim Aparo might never have been at Charlton to follow Dick Giordano to DC...and BATMAN.
Posted by Booksteve at 9:27 AM