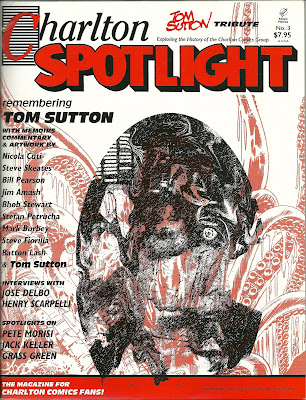 I recently picked up this 2004 issue of CHARLTON SPOTLIGHT at my local comic shop for half price. Most of this issue is done as a special tribute to the then-recently deceased artist Tom Sutton. I first discovered Tom Sutton's work in Marvel's MAD-style humor comic NOT BRAND ECHH! in the mid-sixties. Although he would later do some good super hero work for them, Sutton would go on to establish his reputation instead as a horror/sci-fi artist in the black and white horror magazines and ultimately at Charlton as a mainstay and cover artist during their relatively brief but enjoyable creative renaissance in the mid-seventies. He would return to humor from time to time such as with the Will Elderesque SCHLOMO RAVEN for Byron Preiss (my personal favorite).

Sutton is paid tribute by a number of his fellow creative types in this issue including former Woodworkers and friends of this blog, Bhob Stewart, Bill Pearson and Nick Cuti. In one reprinted interview, he is even quoted as saying, "I worshiped Wally Wood, I copied him...Hell, I traced him! His spaceships, his fantastic little hollowed out panels--incredible magic! Later I got into the horror books but never anything like I was into the fantastic sci-fi stuff." While Sutton goes on to mention copying the styles of other illustrators, also, in time he had developed a unique style and his own unique place in comics history...all because he had been inspired by Wood way back when.
Posted by Booksteve at 12:50 AM