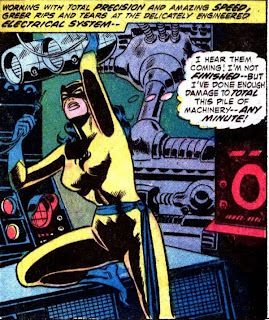 THE CLAWS OF THE CAT was originally designed to be a pro-women's lib character at Marvel in the early seventies. Art on the first issue was by Marie Severin and Wally Wood (with a number of faces obviously redrawn by Marie after the fact). I often wondered if Wood's inks were considered somehow inappropriate because of his tendency to oversexualize women. Note the typical Wood machinary in this panel, though. Anyway, while he may have been gone by the next issue, our friend the Groovy Agent shows us his work on issue 1 today at DIVERSIONS OF THE GROOVY KIND.

http://diversionsofthegroovykind.blogspot.com/2009/09/if-you-blinked-you-missed-beware-claws.html
Posted by Booksteve at 7:26 AM