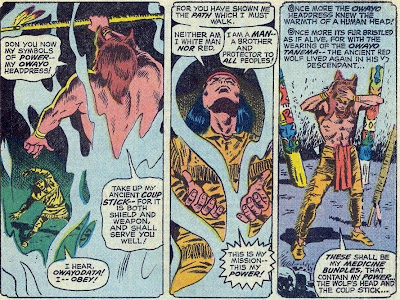 As often stated, Wally Wood's inking tended to just naturally overwhelm pretty much any penciller's work and this was pretty much always a good thing! Even such highly stylized comics artists as Kirby and Ditko were enhanced by Woodwork. One pairing that never worked that well for me was that of veteran Syd Shores and Wood on Marvel's 1971 RED WOLF.

Don't get me wrong. The art is quite good. I've heard Shores (in the late forties Marvel's art director) described as a weak point in the company's late sixties bullpen and that Stan just kept giving him work out of loyalty but I don't get that. Whether his softening inks on Kirby's CAPTAIN AMERICA--a character he himself actually drew far more often than Kirby in the Golden Age!--or his self-inked westerns of a quarter century later, I love his lush style and beautiful, detailed layouts. I just don't feel the combination with Wood worked all that well.

RED WOLF had been a minor antagonist in a "relative" issue of THE AVENGERS from a year earlier when Marvel decided to revamp the character into an equally relevant old western hero. Western comics were having a comeback at the time (or at least the publishers seemed to think so. With rare exception, I never knew anyone who bought any of them new) so a western super hero seemed a sure thing. The character was chosen to be the first to appear in a new SHOWCASE-like title to be called MARVEL SPOTLIGHT. 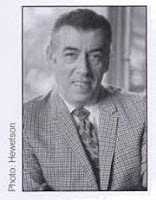 A Neal Adams cover ensured fanboy sales but the inside was Shores and Wood. Probably a better choice for this type of material than Neal anyway. The story is good, re-establishing a variation on the modern-day origin the character had been given previously as well as a variation on the same enemy.

The problem is--and again it's only really a problem in that it seems like it should have been better--the art is just okay. Without Shores' own sometimes sketchy inking style, his work comes across as lacking somehow. What should have made up for that was Wood's inking which instead seems to try to ape Shores style but only half-heartedly. Thus overall, a fairly pedestrian job. S

een here are the panels where Wood's contribution seems to best shine through.
When the character was given his own title, Shores was allowed to self-ink again and the result was better. Soon enough, Wood would stop accepting work from Marvel yet again.
UPDATE 9-27-- Wood Fan Number One, Greg Firmin, sends along this Syd Shores photo and profile from Al Hewetson's book, THE COMPLETE ILLUSTRATED HISTORY OF THE SKYWALD HORROR MOOD. Note the quote from Wood and take it as you will considering that this RED WOLF story seems the only time they ever worked together.
Posted by Booksteve at 8:36 PM