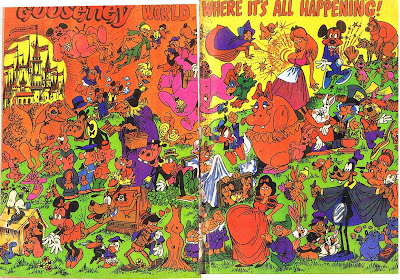 Today over at his MAGIC WHISTLE site ( http://themagicwhistle.blogspot.com/2009/09/goose.html), Sam Henderson posts a piece on GOOSE mgazine, a little known dirtier version of MAD from the late seventies. One of the pieces he runs is this bizarre attempt to parody Woody's Disneyland Memorial Orgy from THE REALIST. It's hard to parody a parody and in fact so much of this is just plain similar to the original that I wonder if the artist (newspaper cartoonist Al Scaduto!) wasn't attempting parody at all. Perhaps he was just ripping off the original for what he assumed was an audience that wouldn't be familiar with it!
Posted by Booksteve at 1:15 PM