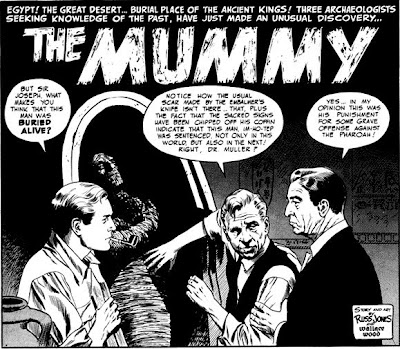 I just this morning discovered that writer/artist/editor Russ Jones has a site where he reprints a number of comics horror stories with which he was involved over the years including an adaptation of THE HORROR OF DRACULA done with former Woodworker (and later DC editor) Joe Orlando as well as the famous adaptation of Karloff's version of THE MUMMY done with Wallace Wood himself. THE MUMMY originally appeared in Warren's MONSTER WORLD in 1964. Read the whole thing here:
http://popfiction.com/hotad/html/monstermania/2001/comics/wood/index.html
Posted by Booksteve at 5:48 AM