Ralph Reese From Web of Horror 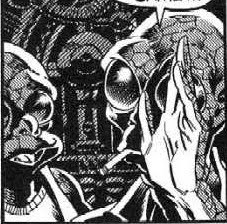 WEB OF HORROR was a short-lived CREEPY-style black and white mag/comic in the late sixties/early seventies that served as a training ground for "the new guys." Jones, Kaluta, Wrightson and, in this example, former Woodworker Ralph Reese. Featured at the always enjoyable COMIC BOOK CATACOMBS is Reese's story (written by Terry Bisson) from the first issue in late 1969. Note that while it is very much in the artist's unique style, there are still Wood-like touches that creep in throughout as the machinery in this panel's background.
http://comicbookcatacombs.blogspot.com/2009/09/skin-eaters-web-of-horror-1-dec-1969.html
Posted by Booksteve at 11:01 PM