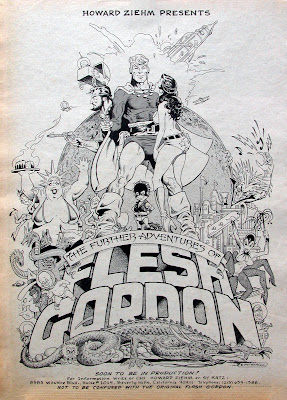 Over at the movie blog, TEMPLE OF SCHLOCK ( http://templeofschlock.blogspot.com/ ) they have a fascinating post featuring movie ads for movies that were never made. Here's William Stout's ad for a never produced early sequel to the surprise hit FLESH GORDON in the mid-seventies. Someone once described Stout, known for his dinosaur illustrations and bootleg record album covers, as the EC artist that never was. That's very evident here as the busy, MAD-like poster features heroes reminiscent of Williamson and Frazetta and a bunch of surrounding little guys and creatures who look as though they would be right at home in a Wally Wood page of the 1960's!
For the record, when a "sequel" finally was produced a dozen years later, it missed anything and everything that was enjoyable about te original and didn't even have the benefit of this poster!
Posted by Booksteve at 8:03 PM