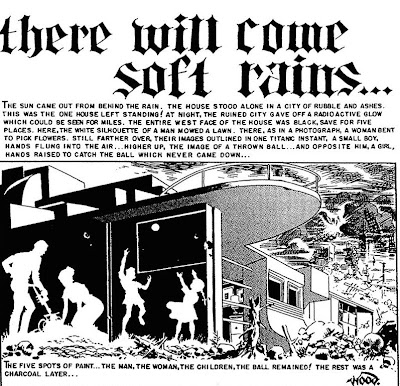 My son bookdave came home from school today and informed me that, having just finished studying Kurt Vonnegut in his seventh grade Language Arts class, they were moving on to Ray Bradbury. Now this was not a surprise. The only surprise perhaps was that they did Vonnegut first. Teachers LOVE Bradbury and have ever since I was in school. He's edgy and literate but tends to be less explicit than other authors and thus less likely to annoy parents who actually pay attention to their children's schoolwork and freak at the hint of a naughty word or concept.

No, what surprised me is that, in particular, they will be studying Bradbury's classic short story--and a longtime favorite of mine--"There Will Come Soft Rains"...from the EC adaptation as illustrated by Wally Wood! Not sure what reprinted version they had but I love the fact that my son--and this PROVES he's my son--immediately recognized Woody's art and told his teacher what a great adaptation she had chosen. For the record, she was apparently not the least bit familiar with EC or Wood. BUT STILL...!
Posted by Booksteve at 3:09 PM