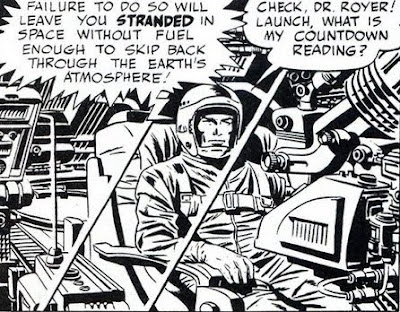 TEN CENT DREAMS shares some SKY MASTERS OF THE SPACE FORCE today from Greg Theakston's 1980's reprinting, complete with that book's behind the scenes info on the strip's creation. Some exciting Jack Kirby/Wally Wood art! I find it a tad ironic that here, with Kirby inked by one of his all-time best inkers, an off-panel character is named "Royer." Fifteen years later, of course, Mike ROYER would become the inker most associated with the King's 1970's work both at DC and then on his return to Marvel!
http://tencentdreams.blogspot.com/2010/01/jack-kirby-wally-wood-classic-sky.html
Posted by Booksteve at 10:37 AM