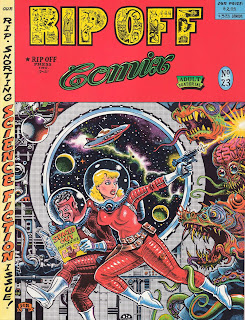 Here we have Hal Robins' cover to RIP-OFF COMIX # 23, published in 1989 as part of that venerable underground's attempt at being a modern alternative comic with an international flavor. I'm not familiar with Robins' work but the magazine's editorial says he was an old time sci-fi movie savant. It also says, however, that this cover harkens back to the classic days of sci-fi paperback covers when clearly it's an EC homage. From the busty babe to the BEMs to the space suits to the bubble helmets to the woodtech on the walls of the ship, this is clearly an homage to Wallace Wood...and a good one at that!
Posted by Booksteve at 8:14 AM