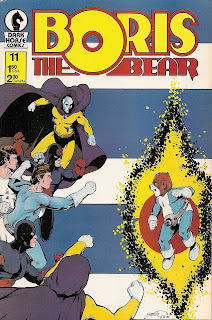 As stated in an earlier posting, Wally Wood's classic T.H.U.N.D.E.R. AGENTS were turning up in all manner of places throughout the eighties, not always authorized and not always well served. One of the more unusual places was 1987's BORIS THE BEAR # 11. BORIS THE BEAR was one of the earliest Dark Horse titles. Possibly designed as a one-shot, the first issue featured Boris as a cute and cuddly little teddy bear (later revealed to be a robot) who took violent vengeance on all of the stupider comics characters then flooding the market. It was amusing. Then came issue two and the need to keep the concept going. Creator/artist James Dean Smith (with input from Mike Richardson and others) actually did a pretty good job of expanding on the essentially one note premise for quite awhile and BORIS THE BEAR lasted a surprising several years on the stands. Smith and his creation still maintain an Internet presence today at http://www.boristhebear.de.vu/ and http://oasiscomics.blogspot.com/. 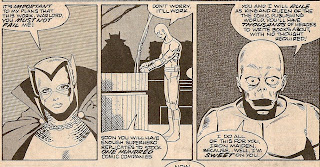 This issue deals with the ghost of Dynamo (with ethereal angel wings yet) who asks for Boris's help to stop the T.H.U.N.D.E.R. folks from being exploited. It seems the Iron Maiden and her minions are cloning the Agents to flood the market with multiple rip-off comics. Eventually, Boris (as DynamoBear) does what Boris does best and destroys the plan. In the end, he meets Dynamo again, this time for a poignant moment at the grave of Wally Wood.

Inking by former Tower artist and Woodworker Dan Adkins provides a welcome familiarity to some of the art as clones of Dynamo, Menthor and NoMan fight Boris. While it's easy to see the good intentions in the story, I can't help but note that this story contains no indication of John Carbonaro's trademark on the characters who appear and thus, in its own way, BORIS THE BEAR # 11 is guilty of being not so much a parody but an unauthorized exploitation of the characters--the very thing it's ostensibly complaining about!
Posted by Booksteve at 12:10 PM