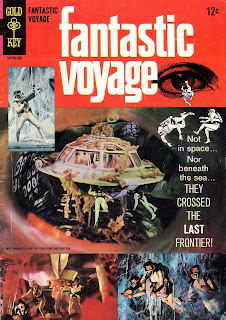 In 1966, director Richard Fleischer (son of animation legend Max Fleischer) took us on a FANTASTIC VOYAGE, a unique sci-fi drama in which scientists are shrunken and inserted into a human body in a teensy tiny "spaceship." It was , in my opinion, the best film for star Stephen Boyd (one of my least favorite leading men of all time) and it was the first real lead for Raquel Welch, not long before her career was diverted to pure sex symbol camp with ONE MILLION YEARS BC. No less than Isaac Asimov was enlisted to novelize the screenplay (and it WAS a novelization in spite of the fact that it was released first). Copied and parodied endlessly in the decades since

, the original movie, although dated in spots, still has a sense of awe. Whether it will in the upcoming remake remains to be seen. 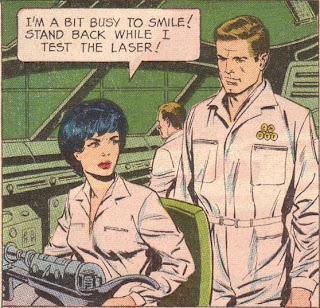 That said, somehow Gold Key Comics managed to come out with an incredibly dull translation of it with equally dull art credited to Adkins, Wood and Coleman! 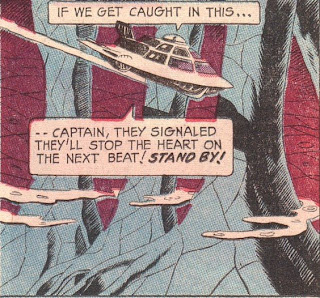 Backgrounds are sparse or downright missing in many panels and figures are stiff and hard to tell apart. The coloring is washed out and Woody can't even seem to make 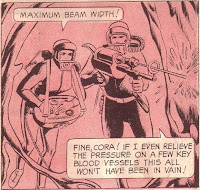 luscious Raquel's character look as hot as a thousand other babes he drew. All in all I have to say I find this to be some of Wood's most disappointing professional work. Even his later, post-illness work shows more imagination.
Posted by Booksteve at 9:44 PM