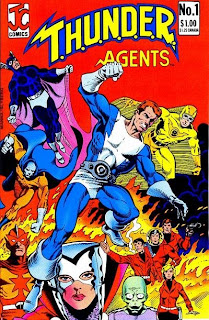 Mark Evanier is reporting the recent passing of John Carbonaro, whom Wood fans would know from his early 1980's purchase of the rights to the T.H.U.N.D.E.R. AGENTS and several subsequent attempts to revive those great characters with little success. Along the way, he had a long but ultimately successful court battle against a claim that the rights were actually public domain. Evanier reports that he had planned for the disposition of the rights after his death so hopefully DYNAMO, NOMAN and friends (most recently being archived by DC) may yet have another chance at a second act.
Posted by Booksteve at 3:17 PM