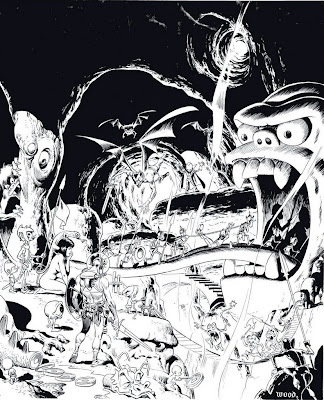 Wood did a number of parodies (both clean and dirty) over the years of his idol Alex Raymond's FLASH GORDON. This single page is from the back cover of the legendary early seventies fanzine, HERITAGE, volume 1B. That's right, in an effort to be different, HERITAGE had issues 1A and 1B rather than issues 1 and 2. I don't recall ever seeing a rational explanation for same but both issues were choice tributes to FLASH GORDON and featured the top talent of the day from Neal Adams and Al Williamson to Raymond himself, Jack Kirby inker Mike Royer and Australian artist Stanley Pitt. The second issue was backed with this wonderful, busy, polished and apparently self-contained drawing by Wood (with assists from Kirchner I believe).
Posted by Booksteve at 10:03 PM