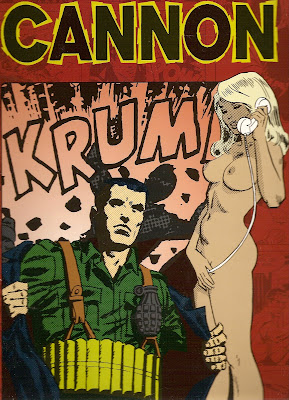 Wally Wood's CANNON ran concurrently with the much lighter SALLY FORTH in the OVERSEAS WEEKLY newspaper of the early 1970's. CANNON is perhaps the ultimate machismo fantasy strip with violence, guns, explosions and/or naked women in something like every third panel sometimes. Originally created by Wood himself for the undistributed 1969 one-shot, HEROES, INC. (and originally done with Steve Ditko pencilling), it would thus seem to be the culmination of his own well-known macho leanings. Or is it an over-the-top parody of the then recently ragingly popular spy genre?
If it were ever to be made into a movie, I would cast Bruce Willis as Cannon. The character of Cannon is a government-sanctioned killing machine with no emotions, no fears and no conscience. He does, however, seem to have a bit of an overactive sex drive. Like a hyperactive STEVE CANYON, his adventures take him into various exotic locations with lots of military and spy hardware.
CANNON features some of the best Woodwork of the period, aided here and there by Nick Cuti, Ralph Reese, possibly Paul Kirchner and Larry Hama and even Neal Adams. I'm pretty sure I spot a few other, less identifiable hands in the art also. There's also lots of barely traced drawings of cars straight out of the clip art files and even a character obviously based (at least visually) on Woody himself.
Taken as a serious story, CANNON can be downright disturbing in spots but as I say above, if it comes right down to it, I'm not at all sure the creators WERE taking it seriously. There's Cannon with a beard, Cannon shaved bald, Cannon on the farm, Cannon in Nazi uniform, Cannon against the maniacal super-villain, Cannon shagging enemy female agents. It's like they were doing a more subtle (and frankly less funny) MAD-like parody of genre and gender cliches.
Posted by Booksteve at 10:57 AM