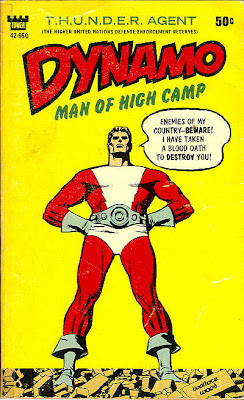 Most versions of the origins of THE T.H.U.N.D.E.R. AGENTS indicate that Tower, known for their mass market publishing, intended all along to collect their comics into book form and reach a whole new market. They did, in fact, end up doing four TA volumes. The fact that they weren't particularly successful, however, might have at least something to do with the fact that they couldn't even get the coloring right on their own flagship superhero in his first papaerback appearance, the now ludicrously entitled DYNAMO--MAN OF HIGH CAMP! If you've never read the series, please don't let this cover's dialogue dissuade you. I guarantee you, the comic's Len Brown would laugh at the above word balloon more than you are now!
Posted by Booksteve at 1:02 PM