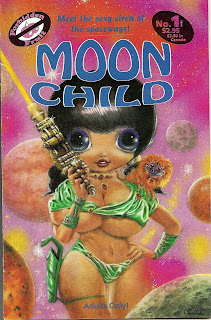 Former Wood sidekick Nick Cuti forever staked his own claim to fame in comics history with his mid-seventies creation of E-MAN. Both before and after that, however, Cuti also developed a following for his own character MOONCHILD THE STARBABE, published off and on and from various publishers since the mid-sixties right up until just a few years ago. Originally done as a series of solo black and white underground comix, I first saw the charcter in color in 1972's EC homage, WEIRD FANTASIES. Both written and drawn by Cuti, Moonie (as she became known later) is a cute, big eyed and bigger breasted space traveler whose adventures later turned up a bit more explic 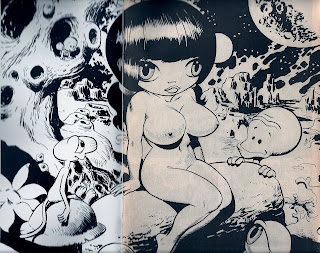 In the early 1990's, Forbidden Fruit ran a three issue mini-series reprinting some of the early work, presenting some all-new work and printing for the first time some originally shelved early stories of the character. The first of these issues (seen above) featured a gorgeous MOONCHILD painting by her creator and also offered for the very first time an interpretation of Moonie by Cuti's mentor, Wallace Wood. That's the one--slightly truncated due to scanner limitations--seen here.

To see what some of Nick Cuti's more serious artwork looks like, check out his TIME MACHINE illustrations here:http://colemanzone.com/Time_Machine_Project/cuti.htm#cosmos
Posted by Booksteve at 3:21 AM