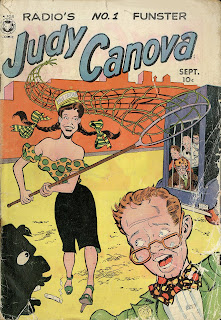 Wood did a lot of early work for Fox Comics, including some in all three issues of JUDY CANOVA. Cover-billed as "Radio's # 1 Funster," Ms. Canova was a hillbilly comedienne who went on to become a not-bad character actress as well as mother to the delightful and beautiful Diana Canova, best known for TV's SOAP. Her on-air popularity in the late forties led to this brief series of comics which was strongly influenced by Al Capp's L'IL ABNER. This particular cover is credited on GCD to Wood solo (I've submitted a correction) but if you look closely, Joe Orlando's name is in the rocks on the ground in the center of the cover. Wood's name also appears discreetly in the collar of the man in the foreground. The art looks to me to be drawn by Joe and inked by Wood. Note also that Wood has a cameo as one of the guys captured. It wouldn't surprise me if the remaining guys in the background included caricatures of Orlando and others who worked at Fox at that time.
Posted by Booksteve at 10:17 AM