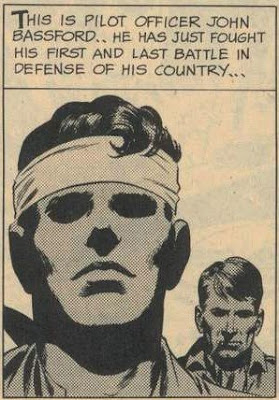 BLAZING COMBAT is not an easy read. The 1966 four issue run (recently collected) has young editor Archie Goodwin taking Harvey Kurtzman's anti-war war comics concept and updating it to the Vietnam era at a time when young people--the mag's intended audience-- were just starting to question the need for the war. Not all of the stories are set in Indochina, however. Like Kurtzman before him, the sensibilities are far from the "Gung Ho" attitudes of WWII era comics. We see the Civil War, The American Revolution , both World Wars and more but not always with "us" as the heroes. There is little honor shown in these short stories--just blood and tragic loss as the reader is often given the POV of the victims o

r of the players on the other side. It sometimes actually HURTS to read BLAZING COMBAT.
Some of the stories seem a bit heavy-handed now but at the time were on the cutting edge of what makes comics a unique art form. The violence and its aftermath tend to be realistic to an almost painful point and Goodwin is at his early best both as editor and writer. The real stars of BLAZING COMBAT, however, are the artists. As with CREEPY and EERIE before it, the mag gathered many of the best of the EC crew a decade after that company's essential demise. To a man, their work here is some of their best storytelling the medium had seen up to that time. 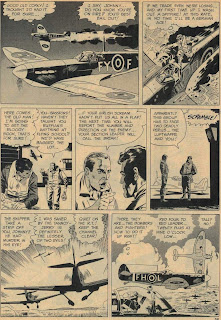 all for striking covers are by Frank Frazetta who even then was starting to transcend the comics medium and become the ultimate fantasy artist of his day. These paintings, however, showed that he could present hard-hitting realism when called for also.
Inside, the visual treats continue with two Wally Wood stories late in the run. According to THE WALLACE WOOD CHECKLIST, the first is with Adkins and the second with Reese and Adkins. Just a guess, but the second seems to me to possibly have some work from Russ Jones, a Woodworker around this time who had also been the original editor of Warren's CREEPY. I could be wrong.
Both of Woody's stories are World War II air war pieces. The first, in issue three, "The Battle of Britain," is the more celebrated of the two and offers some wonderfully illustrated fighter plane scenes. The writing is also credited to Wood. 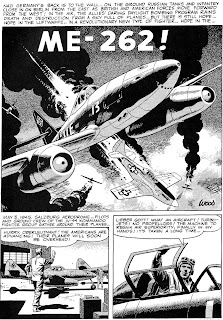 The second Wood strip "ME-262," is a Goodwin script with art that is heavily shaded and screened. There is also a heavy emphasis on photo reference and traced imagery, leaving it sadly as the least strip in the magazine's final issue.
Other EC veterans who appear are Reed Crandall, John Severin, Angelo Torres, Joe Orlando, Al Williamson, George Evans and DC war specialist Russ Heath. Other comics veterans offering some of their 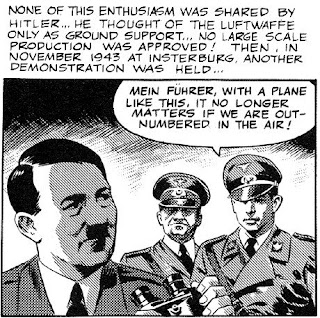 best work are Gene Colan, Gray Morrow, Alex Toth and the vastly under-rated Al McWilliams. Unlike the other Warren magazines of the era, there is no filler here.
BLAZING COMBAT is nobody's definition of a fun read but if you're a comics art fan, BLAZING COMBAT is essential. If you are a student of the influences on the later sixties anti-war movement don't overlook Archie Goodwin. Once again, like Kurtzman before him, we may never know just how many young readers were influenced by these four issues.
Posted by Booksteve at 9:49 PM