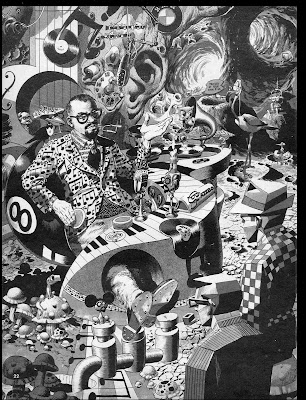 Here we have one of my favorite Wally Wood pieces of all time. It's just so detailed you could easily spend ten-twenty minutes savoring it. From MAD # 31 in late 1956, this is a portrait of Al "Jazzbo" Collins, a now mostly forgotten name in pop culture history. Collins had been a popular "hip" disc jockey in the early days of radio dj's. He was popular enough that he also appeared as himself in a very good episode of the sci-fi radio series, X MINUS ONE. In 1957, he even briefly became a host of the TONIGHT SHOW in its flop incarnation as TONIGHT! AMERICA AFTER DARK. I remember hearing him on Public radio as late as the early 1980's but for the most part his star faded rapidly. MAD, however, in these early Feldstein issues, was often getting popular topical folks such as Ernie Kovacs, Stan Freberg and Tom Lehrer to either do pieces for them or let them illustrate already existing bits. Al "Jazzbo" Collins' piece in this issue wasn't really that funny but it featured some nice illustrations as always during this period from Woody...including this masterpiece!
Posted by Booksteve at 6:07 PM