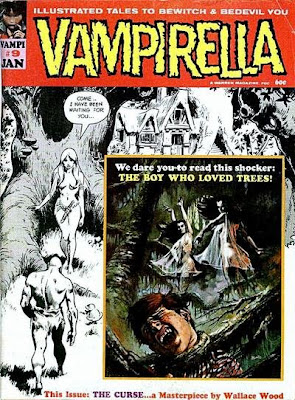 Once again Woody gets name-checked on a cover. I probably should be keeping track of these. Anyway, VAMPIRELLA # 9 came out in late 1970 and featured the original publication of "The Curse." As we noted in a previous post, "The Curse" is one of Wally Wood's best pieces of the era and his second best for Warren Publishing. It was so popular that later in 1971 it was reprinted in toto in Les Daniels' hardcover book COMIX: A HISTORY OF COMIC BOOKS IN AMERICA. Warren went on to reprint it at least three times themselves. Note that someone at Warren must have thought enough of it to give it a large portion of the cover that one would have normally found fully taken up with Boris Vallejo's (?) now shrunken painting. Instead, Wally's black and white line art from page two of the story makes for a unique and memorable cover. If you haven't read "The Curse," here it is online over at THE FORTRESS OF FORTITUDE from last November:http://fortressofortitude.wordpress.com/2008/11/24/the-curse/
Posted by Booksteve at 12:26 PM