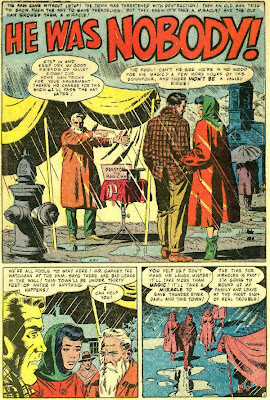 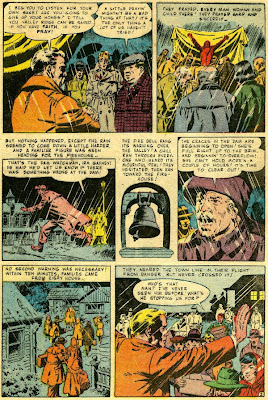 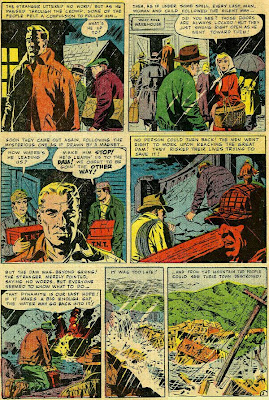 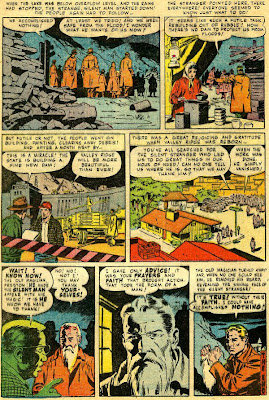 I've just re-read this 4 page Wood story several times and I still don't understand it. "He Was Nobody" is from Atlas/Marvel's 1956 JOURNEY INTO UNKNOWN WORLDS and could easily be mistaken for an EC story if it had that company's distinctive Leroy lettering. There's no credit here or in Stewart as to the writer. Stan Lee? Woody himself? Whoever it was, I can't figure it out. Apparently some young guy pretends to be an old magician in a town about to be destroyed by a flood. Flood comes. Old guy suggests praying. Mysterious, silent guy shows up and like a Pied Piper leads the townspeople into trying in vain to save their town. Town gets destroyed anyway. Silent guy disppears. Months later, the government comes along to rebuild the dam. Townspeople look everywhere for silent guy to thank him (for what?) but can't find him so they thank old magician instead...only to have the old magician pull off fake whiskers in the end and show the rerader hat he was, in fact, silent guy! Was he God? the Devil? Merlin? Insane?WTF??? Pretty art though from a period when Wood was still riding high at MAD.
Posted by Booksteve at 6:23 AM